The Dog Walker (and How We Can Keep Our Dogs Safe)

The rise in dog “thefts” over the last year has been a huge worry for all dog parents. This has undoubtedly been sparked by the increased demand for dogs during the pandemic – and when 'morally bankrupt sub-human scum' see an opportunity to make some money they’ll happily take it.

In case you’re wondering why I placed the word “thefts” in inverted commas it’s because “dog theft” should be commonly referred to as “dog abduction”. I mean, you can’t “steal” a living, sentient being. Nobody’s going to call the police and say someone’s stolen their gran.

Sadly, we can’t purge the world of evil humans overnight, but there’s a lot we can do in order to reduce the risk of our beloved family members being abducted.

Personally, I think leaving your dog unattended in a public place is a huge no-no. Even if it’s “only for five minutes” outside a shop, cafe or polling station. It would only take a few seconds for some dregs of humanity to unclip the leash and take your pooch, especially if they don't put up a fight.

As responsible dog parents we also need to be cautious of the people we trust to care for our dogs. While it’s unlikely that a professional dog walker will abduct or intentionally harm your dog, we still need to make sure they have all the credentials – including insurance and glowing reviews.

Dig deep into their background and do a search of their social media profiles. They can offer a lot of information about someone and the type of person they are in general.

Believe me, not everyone who works with animals is a kind, decent human being. I’ve met one or two self confessed “people haters” who claim to love animals – yet the way they treat humans leaves a lot to be desired. To me, that’s a warning sign that must be taken into consideration.

That’s not to say these sociopaths are capable of animal neglect or cruelty, but they may not be very forthcoming or truthful if anything did happen to your dog.

I’m sure the vast majority of people who work with animals do so because they love animals. However I know others who work with animals simply because they favour them over human beings, or they just needed a job. Believe it or not, some people who work in customer services don’t necessarily love customers, but their job pays the bills so they put on a facade and stick with it until something else comes up.

Yes, that may sound a tad cynical, but in the last couple of years I’ve become a lot more guarded about who I trust with my pooch. She's my world and if I don't trust someone 100% then there's no way in the world that person will come within two metres of the bitch.

As a rule I’m not comfortable with friends walking her, but this is mostly because of her unpredictable nature. She’s better off-leash, but her recall can be “patchy” if there’s a menagerie of animals in the vicinity – cats, squirrels, etc. Sometimes the stubborn Akita in her overrides all common sense.

This blog was written before the “muntjac deer on the marshes” incident, which will be a blog in its own right one day.

A friend… or should I say... someone I once knew… suggested a “professional” dog walker to me a few years ago. Obviously they cost around £15 an hour, but they also come with the security of knowing your pooch is being well looked after. Also, these dog walkers are insured, so if anything does happen then you’re covered. Although obviously nobody wants anything untoward to happen.

I’m not going to reveal the identity of this dog walker as that wouldn’t be fair. Several years have passed and I know how even a 3 star review can be detrimental to a small business. I'm sure they were a nice enough person, but I just wasn’t entirely satisfied with their service.

An early ‘red flag’ came when, on their first walk, they returned Luna over 15 minutes late. She said she’d bumped into someone she knew, but also mentioned that she’d let Luna off the leash and had some kind of hilarious nightmare getting her back. In fact she was so apologetic that she offered the walk free of charge.

Despite this shooting my anxiety to pieces I paid her the full amount – but no extra for the additional 15 minutes – and just put it down to “one of those things”.

However, over the next few weeks there were a couple of other things that made me a bit uncomfortable, and she wouldn’t phone if she was running 10 or 15 minutes late. Yes it happens, but even a quick text to say “Sorry, be there in 10” would go a long way.

Likewise, if I was running late with someone's dog I'd like to think I'd pop them a quick text to say "on my way!" or words to that effect.

I’m never going to name the individual as, like I said, that wouldn’t be fair – and I’m sure they love dogs as much as I do – but I wouldn’t “recommend” their services if anyone asked me for a list of respectable dog walkers.

The person who put me in touch actually ghosted me a couple of years later, and – in hindsight – I don’t think they held me – or my pooch – in high regard. So, perhaps, they said it was “just David and Luna” and therefore their dog walking friend didn’t treat me with the same level of professionalism or respect they’d give to their other clients.

I’m also aware that Luna can be a stubborn pain in the ass once she gets the scent of something, so, maybe, they didn’t think it was worth their time.

The bitch also has an issue with barking at other dogs when she’s leashed, and I remember the walker commenting that it happened a few times.

I doubt she cried in her bed when I said I didn't need her dog walking services anymore.

These days I don’t really feel the need for a dog walker. Although it would be nice to sit at home and work, uninterrupted, for a couple of hours, it can also be counter productive. If Luna’s out walking with someone else then I’d worry… and worrying/pacing isn’t conducive to focusing on my work.

Obviously we can’t wrap our pooches in cotton wool or keep them under lock and key, but we can minimise the risks by using our basic common sense.

Would you leave a suitcase containing £50,000 outside a shop for five minutes? Would you even leave it in your garden without locking the gate? If the answer is no then think about how much more the dog is worth – to you – and how you wouldn't risk his or her life for anything.

Also, dog walkers shouldn't need to arm themselves, but carrying a personal alarm or a can of pepper spray could work wonders. They're readily available and far better than carrying a knife or shotgun. Yes, it may be tempting to end someone for trying to take your dog, but you can't send your dog a visiting order from prison. Well, so I've been told. 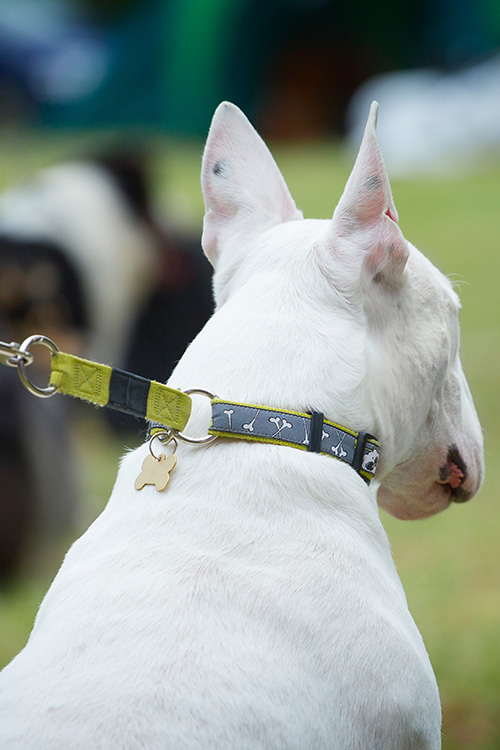