A Day in the Life

I wake up at around 6am with a start. Luna has just sneezed in my face and is now walking around in circles, apparently oblivious to the fact that I’m under the duvet. So I cover my groin, to prevent her from trampling my family jewels.

Luna is a strapping bitch, weighing around 30kg (66lbs) – about three-fifths as heavy as an Octopus. Thankfully she’s never scored a direct hit on my genitalia, but if she did there certainly wouldn’t be anymore entries on my family tree. Although, at 47, that’s becoming increasingly unlikely anyway.

After licking herself, for what feels like an eternity, Luna settles on my leg, so I leave it in the same position until it eventually goes numb. I then gingerly reposition myself and she lets out a deep, frustrated sigh – as if me sleeping in my own bed is a huge inconvenience to her.

A couple of hours later, at around 8am, she jumps off the bed, shakes herself violently, and exits the bedroom. Depending on her mood she’ll then start throwing her chew around the lounge, lie in front of the window, or request to go out for a pee. If I hear a prolonged ‘clippity-clop’ on the kitchen floor I know she wants to go out – post haste.

If she’s just going nuts in the lounge I’ll lie in bed and pick up my phone to see if any e-mails have arrived since I last checked at 3am. Then, after taking a deep breath, I check the BBC News website to see what horrors have been unleashed upon the world. Twitter used to be my first port of call for the news, but I found the comments were a deep, dark rabbit hole of doom. Not the best way to start the day.

Once I’m up, the first thing I do is make myself a cup of coffee and let Luna out in the garden for a quick pee. She’s not out there for long, and I only have time for a couple of mouthfuls of coffee before she starts badgering me for a walk.

We tend to take the walk in the marshes near the river, as, although it can get terribly muddy in wet weather, it’s away from traffic and we seldom encounter another soul.

I curse under my breath as Luna climbs down into the marshes and stands there, knee deep in thick mud, like a reveller at Glastonbury.

Upon our arrival home I try to contain her in the bathroom so I can get her in the bath. It’s a bit like the police kettling a large crowd within a limited area, but she knows what I’m up to so it’s probably more like herding cats.

The bathing process tends to take about an hour, including the clean-up operation afterwards. Due to her brindle coat I usually find the mud is far worse than I initially envisaged.

This tends to be the moment when my “I wish I’d got a chinchilla,” thought reaches the forefront of my mind.

After the bath I stick some meat in Luna’s bowl and she looks at me like a middle-class woman in a posh restaurant whose steak is marginally over-cooked. She’ll later lick the bowl clean, but not before I add some vegetables and a bit of sausage. She’s a fussy bitch.

At around 12pm I sit down with my coffee and muffin, hoping to get a call from Phil and Holly on This Morning. I’ve entered the free ‘Spin to Win’ competition for the last nine months, but so far it’s yet to yield a result. My anger at the human race tends to build each time someone answers without saying the phrase, or the caller appears completely stoic after winning a life-changing sum of money.

Anyone who knows me knows that I’m very introverted and reserved – but if I won £3,000 I’d scream like a teenage girl at a Beatles concert in the 1960s.

Throughout the day my mind is consumed by omnipresent anxious thoughts, and they go round and round like a hamster on a wheel. Will I be able to pay the rent this month? Are my parents okay? Is my car going to start? Is Luna okay? Am I getting fat? X hasn’t replied to my message… has it been misconstrued? Why did X block me on Facebook for absolutely no reason? How many more cold, uncaring charlatans are lurking in my friends list? Are my floaters getting worse? What’s that rash on my groin? That wasn’t there yesterday….

*My floaters refer to my eyes, and aren’t anything bathroom related*

As soon as the dog is out of my face I can then start trying to be productive.

The whole 9-5 schedule went out the window years ago, and my work day now consists of four two-hour blocks – so I clock up a total of eight hours solid. Although I have been known to work for 10 or 12 hours if I’m on a deadline.

Sometimes I listen to a podcast while I’m working, and I’m currently listening to ‘Serial Killers’ on Spotify. It’s a fascinating and thought-provoking subject, but not one to binge late at night.

During each two-hour time-block I work, and everything else is dead to me. If I have to take a pee or rescue a sock (from the dog’s mouth) I halt the stopwatch and resume once I’ve sat down again. This way I know I’m achieving my targets, and I can be sure I’ve worked for the full eight hours.

I’ve also been known to work for six hours, seven days a week. It all really depends on how much I have on and how much of a pain in the ass Luna is on any given day.

Luna suddenly has a frenzied barking episode, because a couple of people have dared to use the public pavement to walk past the window. I’ve yet to find out what she’d do if someone tried to break in, but I don’t think they’d ever try again.

I’m not exactly Gino D'Acampo in the kitchen, but I do tend to cook extra meat and vegetables for Luna – and she’s never complained. Although for a dog who eats cat shit that’s probably not saying much.

I can often be found working until 2am, but have been known to work until 3am occasionally. This tends to help with my productivity as Luna is often bouncing off the walls earlier in the evening.

If I am working until 2am then my “no coffee after midnight” rule is adhered to at all times.

Before bed I have to entice Luna off my duvet, and she then leaps back on the bed to continue her slumber. She likes to lie down and stare at me for several minutes, as if she’s expecting a review of the day. After that she gets up, sticks her ass in my face, and settles down to sleep… 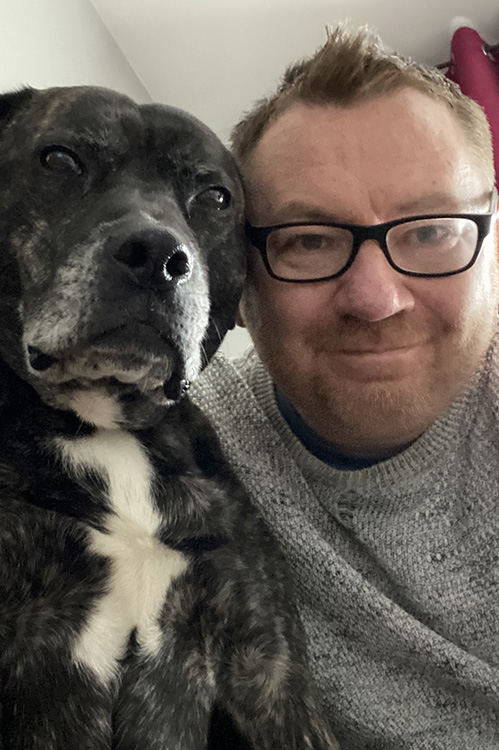