7 Ways Luna Has Changed My Life (in 7 years)

Prior to having a dog I’d spend money like water. To say I was “frivolous” with my readies would probably be a bit of an understatement. DVDs, expensive lunches, fine wine, holidays (including a trip to America that blitzed my credit card). Falling into poverty was, perhaps, always inevitable. Having £1000 deducted from my salary (without fair warning) was the hammer blow, but, if I hadn't been spending with reckless abandon, I could have had a rainy day fund for such an eventuality.

Obviously giving up on Luna when times were hard was never an option – I’d need to be dead or dying – so it forced me to focus on what was important. That was obviously the life of my dog, who I had sworn to protect, and not filling one’s life with this non-essential shizzle I couldn’t afford anyway.

When you have a dog, budgeting is very hard, but it teaches you to adapt and make more sensible life choices. These days I just buy basic essentials and save whatever I can for a rainy day. I’m sure many people would say I was extremely poor, but I’d say I was closer to privileged. Roof over my head, food in the cupboard, a car that drives...

In summery, I think Luna saved me from becoming a very materialistic individual who constantly chased “nice things” I didn’t really need. This more frugal approach to spending will stay with me for the rest of my days.
‍

In the last couple of years one or two “friends” have blocked me on social media. One was intrinsically linked to me adopting Luna, the other can only be described as a good “fair weather” friend of several years. Prior to Luna’s arrival I’d never experienced such cold, dysfunctional behaviour – but it did force me to take stock and appreciate the kind, decent people who were – and still are – in my life.

The phrase "cancel culture" didn't exist when I adopted Luna. At least, I wasn't aware of its existence. Although, since 2019, I've noticed more and more people happily announcing they've blocked someone for simply having a difference of opinion. Whereas I'm of the mind that, if someone annoys or upsets me, I talk to them in the hope of resolving the situation. Yet we now seem to be breeding a culture of cowards and sociopaths who really don't care – while their friends "normalise" such behaviour because they don't have the courage to say; "Actually, that's a bit messed up."

It’s funny, I spent years wondering if I was good enough to have these people in my life… and in a plot twist worthy of the Twilight Zone it turns out that *they* weren’t good enough people to have in my life. So the universe "pruned" them from my world.

Note: It’s important to know the difference between someone blocking you and someone deactivating their account (as more people are doing these days). I was able to view their profiles via my “other” Facebook account, so I knew they weren’t dead and appeared “fine” (in a loose sense of the word). And yes, I understand we’re all fighting battles and some people adopt unhealthy coping mechanisms at the expense of others – so I’m not judging them – but I don’t believe anxiety is free pass to treat people with such unkind disregard. Although I admit, it is much cheaper than therapy.

It’s also worth noting that the friend may be in a toxic relationship and their “other half” has a handle on their relationships – so it’s not always personal. We only see a tiny part of our friends' lives and you never know what demons they're wrestling with on a daily basis.

When you’re a single person with a dog like Luna you can’t just take a holiday or visit friends and family without a lot of forward thinking and planning. You can’t even just pop into a shop while you’re out walking or attend a call of nature at a convenient moment (i.e. before wetting yourself)

Sometimes it’s these very small things that blindside you when you're least expecting it. I remember visiting Southwold (with Luna) when I needed to visit a public toilet (for a pee). Obviously leaving her outside, unattended, was a huge no no – and asking a stranger to hold her for five minutes was equally dangerous. Let’s face it... if a “friend” can have a personality transplant overnight then trusting my dog with a complete stranger is never going to happen.

In the end I took her into the cubicle with me and just took the strange looks on the chin.

Note: I have never wet myself. Well, certainly not in public.

Having a dog has pretty much destroyed the structure of my working day. It’s simply impossible to sit down and work, uninterrupted, for four hours, have lunch, then work another four or five hours without further interruption. So I’ve adapted, and now work in two hour “blocks” throughout the day. I also time those blocks, so if I have to pause for five minutes (to rescue a sock) it’s not logged as working hours.

Imagine ordering a huge pizza for breakfast. Instead of eating the thing in one sitting you have two slices, and all subsequent slices throughout the day. So you still eat the whole pizza, but in a different way.

This analogy could also work with cakes – without the need for reheating (as and when required).

Sadly, my social life passed away in 2014, so very little can be said. However, this has worked wonders for my social anxiety.

To be honest I gave up on trying to follow the latest TV shows in 2014 – and still haven’t watched season four of Game of Thrones. So a lot of the shows I watch now were things that bypassed me seven years ago. However, it’s not a bad thing. If I unwittingly caught “spoilers” at the time then I’ve long forgotten them. It’s also nice to now watch the episodes on a daily basis, rather than wait weeks/months for the plot to unfold.

Gone are the days when I could eat a slice of toast without an once of guilt. These days I’ve become accustomed to eating while Luna’s piercing feral gaze burns a hole in my skull. This is typically followed by strings of slobber, hanging from the sides of her mouth like manky shoelaces.

When you share your bed with a 30kg Staff X Akita then you can kiss goodbye to a good night’s sleep. I’ve lost count of the times I’ve woken up to her sneezing in my face, licking her parts – vigorously – or walking around in a circle 500 times.

Yet, as with everything, you adapt to such situations. Thankfully I work from home, so nobody’s going to judge me if I catch 40 winks at 4pm in the afternoon.

Luna has obviously changed my life in many other ways – both good and bad – but now we’re in Year 8 I’ve become so acclimatised to my daily life that I can’t imagine spending my days without her. 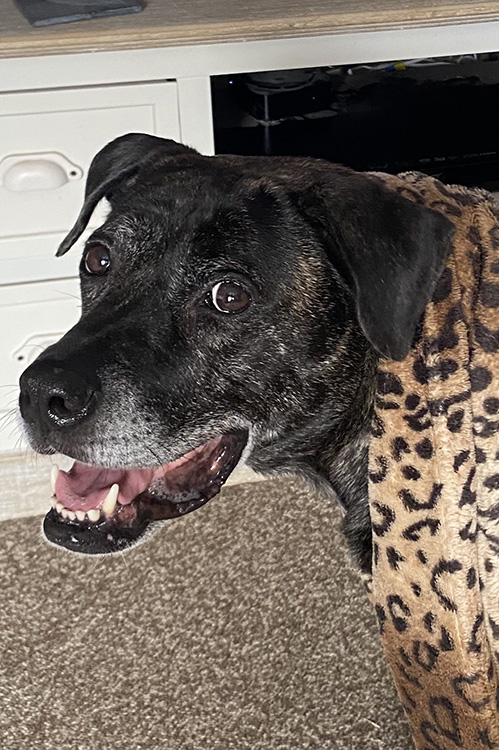